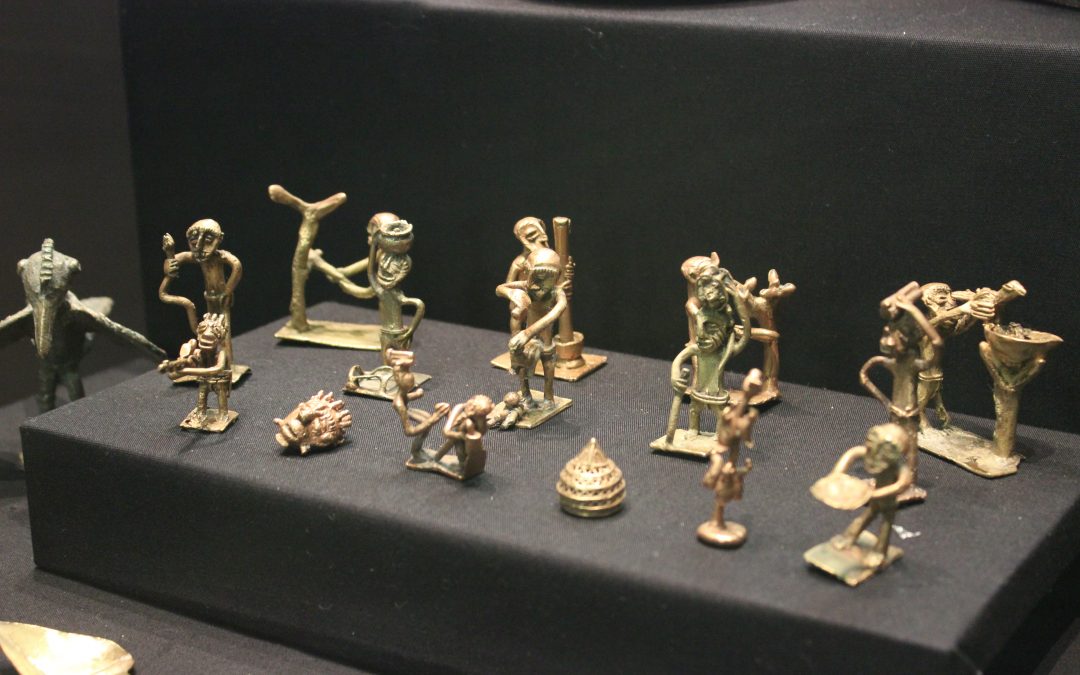 by Benjamina Efua Dadzie, Museum of Archaeology and Anthropology, Cambridge

This blog post is the result of a collaboration between Ipswich Museum and the Museum of Archaeology and Anthropology, Cambridge for the Power of Stories exhibition showing at Christchurch Mansion until 24 October 2021. The exhibition explores how stories are used by people for different purposes, and the Akan goldweights in the Ipswich collection are included in a part of the display which spotlights stories as a method for influencing thought and behaviour.

Benjamina Efua Dadzie is a writer and researcher, with interest in West African cultures, especially Akan and Yoruba. She has a BA (Hons) in Archaeology from the University of Manchester, and an MA in the Arts of Africa, Oceania and the Americas from the University of East Anglia. She has researched currency in pre-colonial Ghana, and the Akan goldweights collection of Manchester Museum and their circumstances of acquisition. In her work, she proposes new ways of displaying Akan material culture, by moving away from typological classification and bringing in the voice of Akan people, for whom the goldweights have continued relevance in the manifestation of their identity. Her current research deals with the history of African Christianity, the impact of missionary presence in 19th century Abeokuta (southwestern Nigeria), focusing on changes in identity and material culture. She is a Collections Assistant in Anthropology at the University of Cambridge’s Museum of Archaeology and Anthropology; and the Digital Editor of the award-winning open-access publication 100 Histories of 100 Worlds in 1 Object. 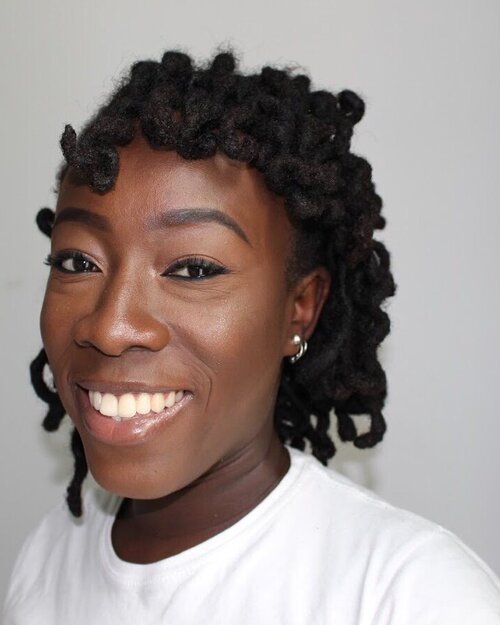 As a child and a young adult, I spent a lot of time with the elders in my family, for both mundane activities such as cooking, and more serious business such as funerary rites and performances.

I would ask a lot of questions, curious about the ways in which they twisted and turned our Akan language into proverbs to sharply communicate their joys, displeasures, and struggles; as well as to conceal statements that I was not supposed to hear or that were too heavy to say in plain language. I started paying attention and aspired to learn how I could also give weight to my language, by tapping into our rich oral tradition. And so, when I encountered the Akan goldweights, a world opened to me, to study how the Akan people used figurative means to communicate by way of proverbs their history, culture and values to the people they encountered.

I am happy to share with you what I have had the opportunity to learn about the Akan people of south-western Ghana. 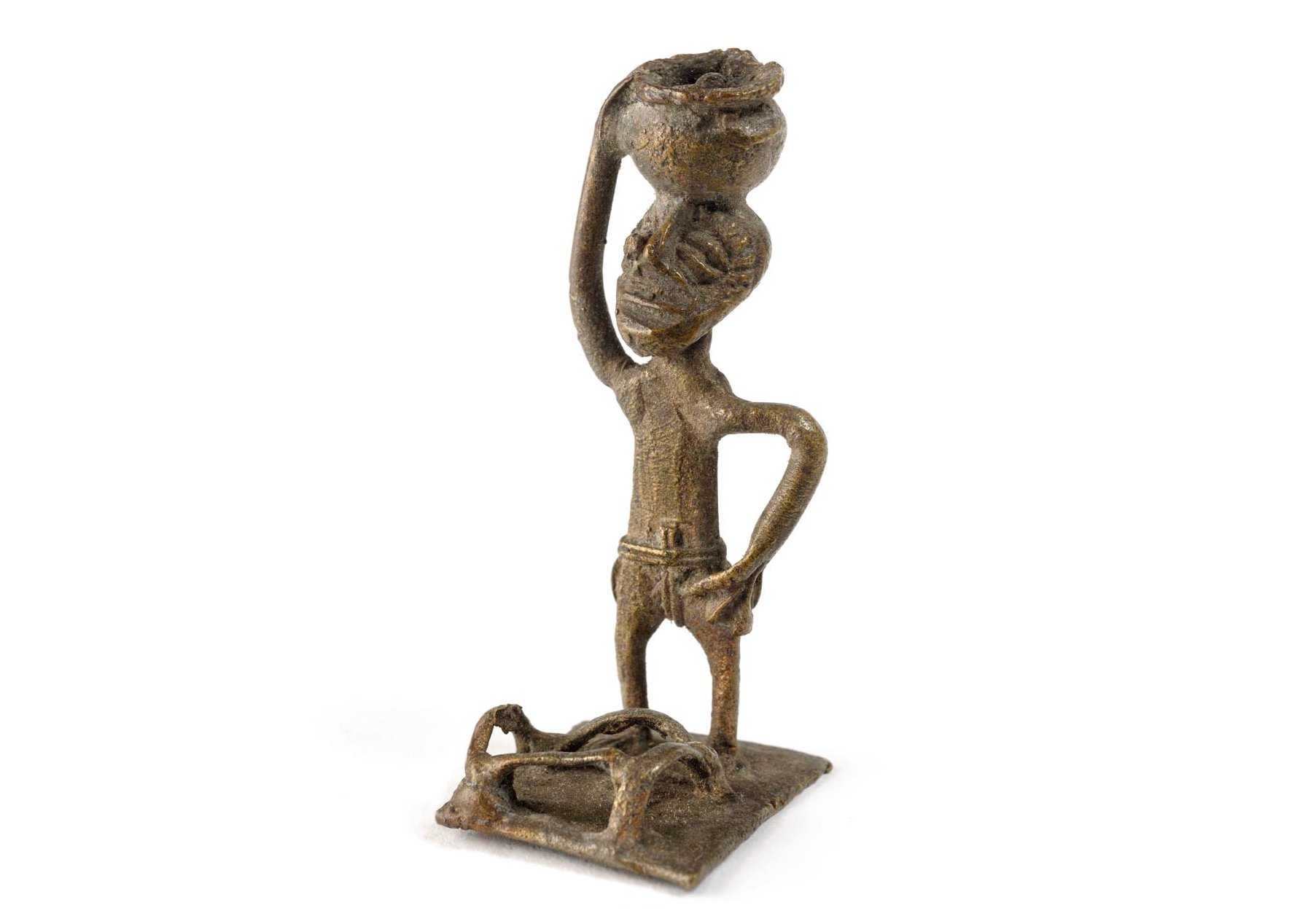 Figure 1: A figurative goldweight depicting a person carrying a water or cooking pot, which they are about to place on a fire set in front of them. One of a group of goldweights given by Major AV Watson of the Gold Coast Regiment. Source: Ipswich Museum, object no. IPSMG:R.1944.35.9 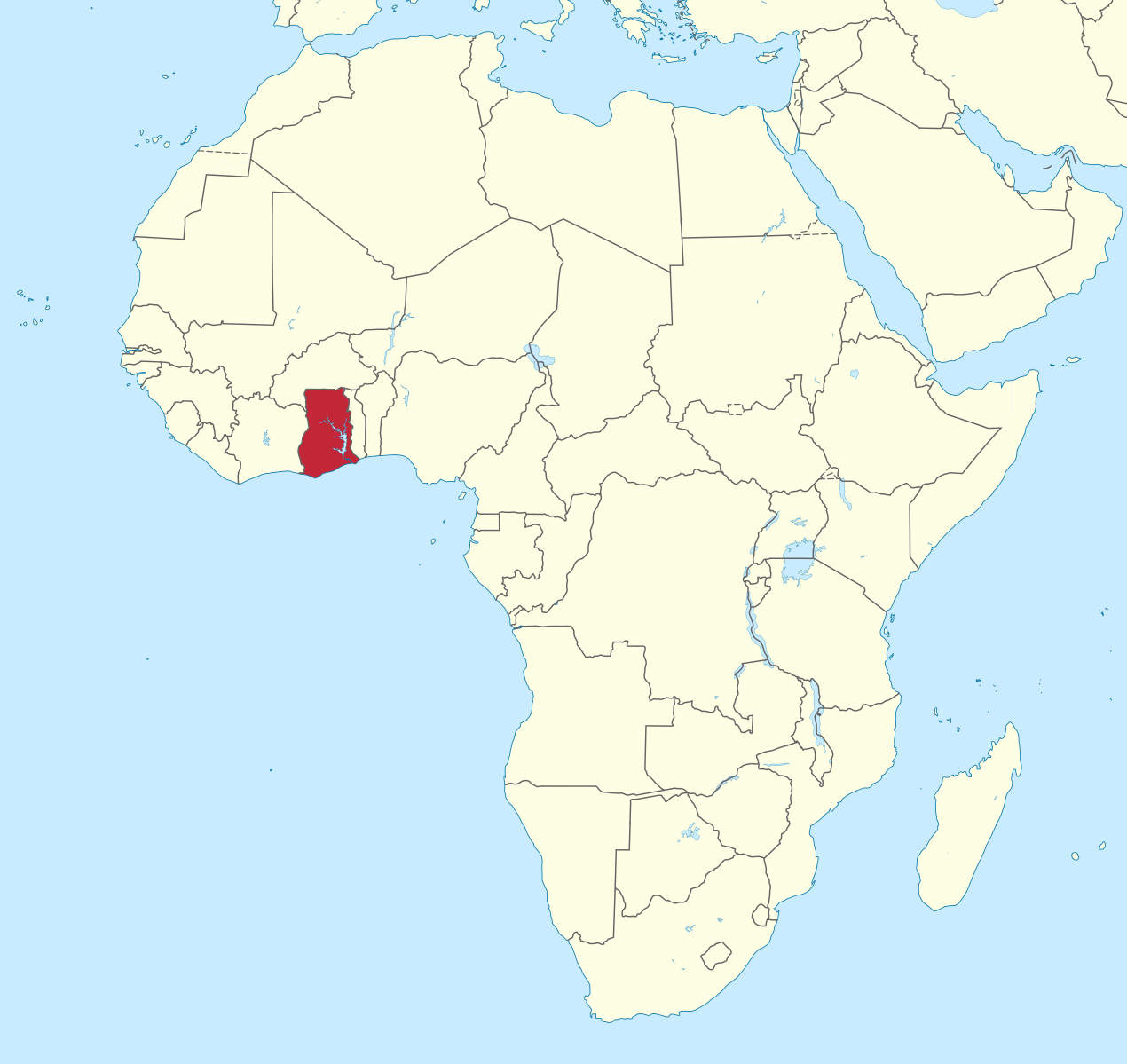 Figure 2: Map of the African continent highlighting the geographic location of the Republic of Ghana. Source: Wikimedia Commons, 2011. 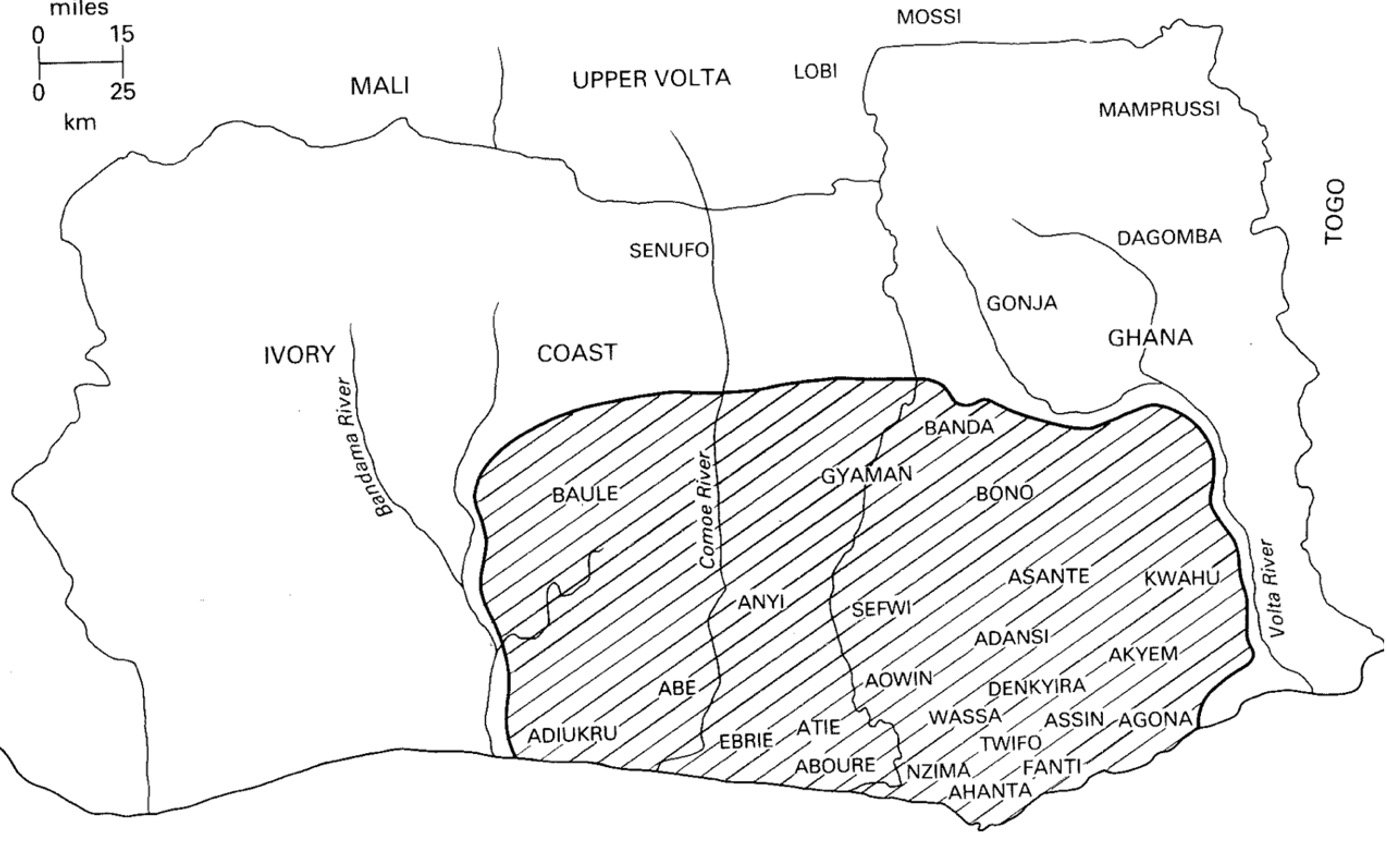 Figure 3: Map of Ghana and Ivory Coast showing the distribution of the Akan and the ‘goldweight zone’ across the two nations. Source: Garrard, 1980: xxii.

Scholars have often debated the origin of the Akan people, foregrounding a theory of a northern origin. Oral narratives have it that the Akan people inhabited the eastern Sahara region, around the Tibesti Mountains. Here they assimilated with the local Arab population and married interracially. Before moving towards the coastal area of the Gold Coast however, they dwelled in northern Gold Coast, in today’s Gonja region, and after the exodus from these territories, some became refugees in neighbouring countries. Descendants of these refugees founded, in 1701, the rainforest kingdom of Asante (Asanteman). 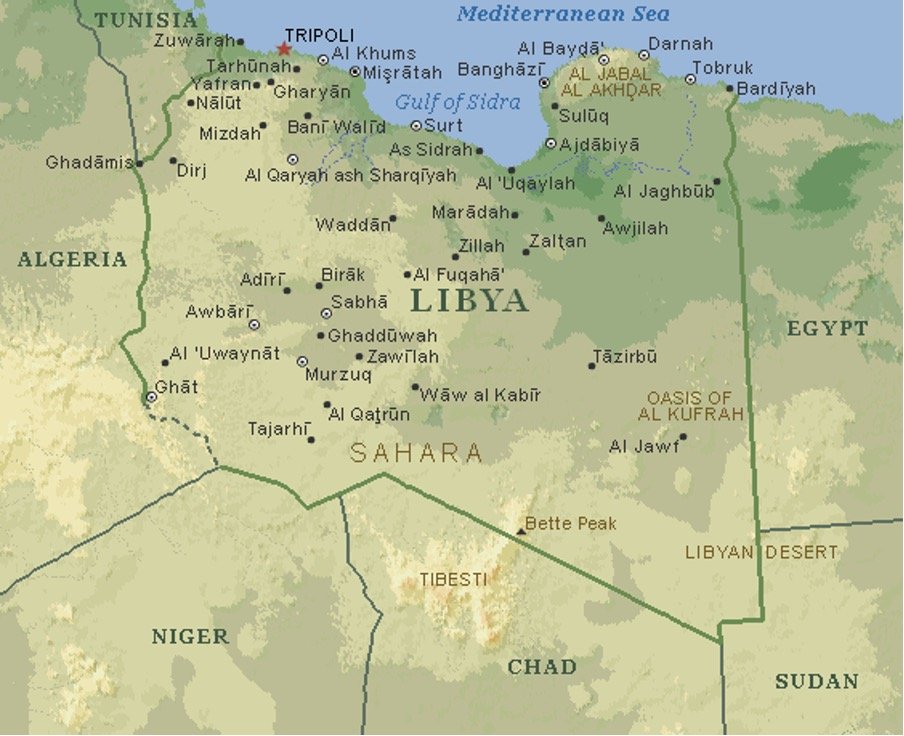 Gold was a naturally occurring mineral in the region of present-day Ghana, especially in the southern part, in the areas of Obuasi, Tarkwa, Prestea and Dunkwa-on-Offin. 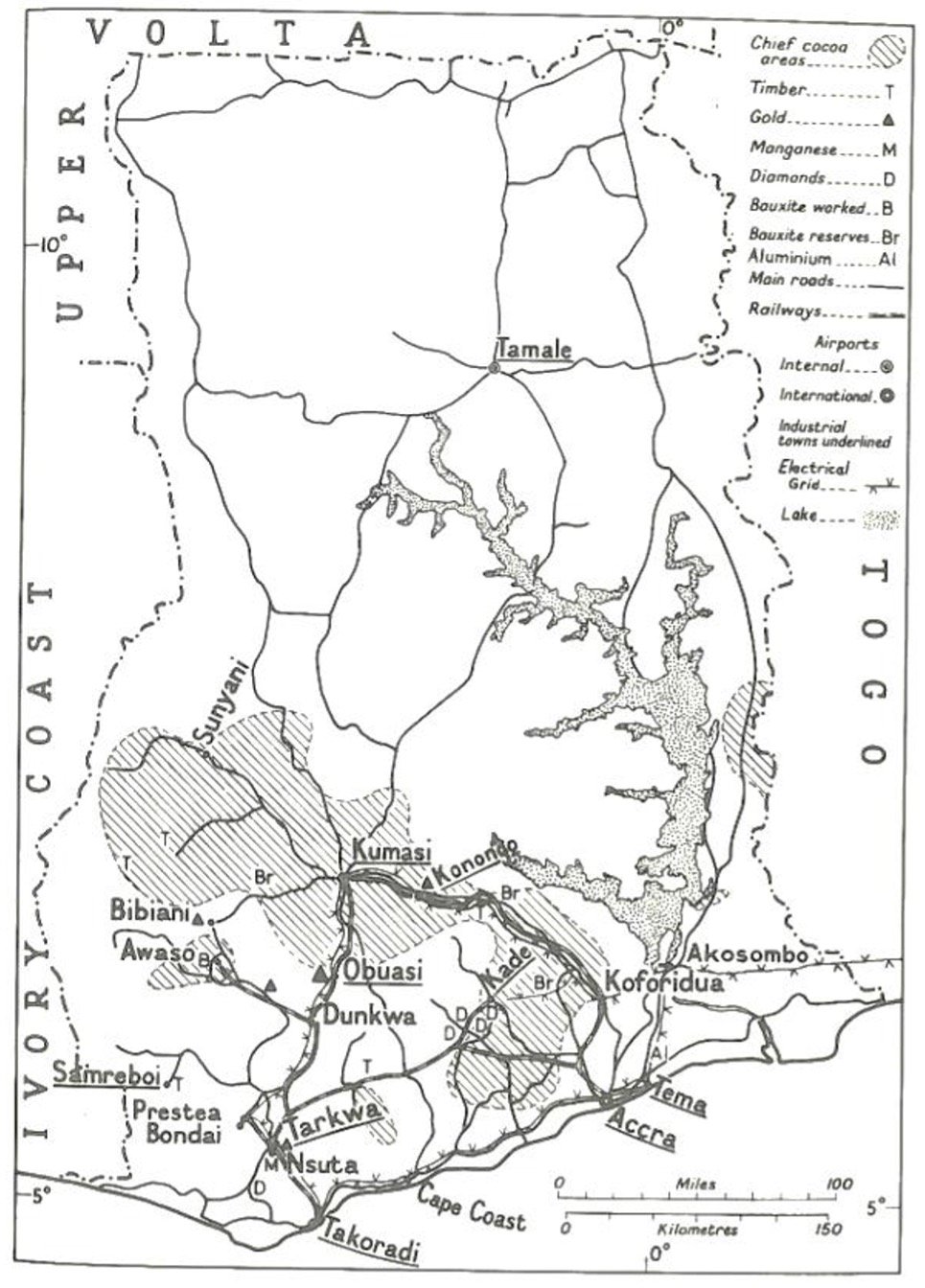 The Akan were aware of the rich resources of their land, as it could be found on beaches after heavy rainfalls. Gold was minted by both locals and foreigners. It was gold that drove the Portuguese, Dutch, and English to the shores of the Gold Coast from the late 15th century; and it was gold that encouraged trade with the neighbouring kingdoms of the Western Sudan (northern part of West Africa) prior to European colonial presence. Unlike the Arabs of the Western Sudan who minted and cast gold into coins as early as the 7th century, the Akan used gold-dust as their currency. Consequently, they developed a gold weighting system to negotiate and conclude transactions. 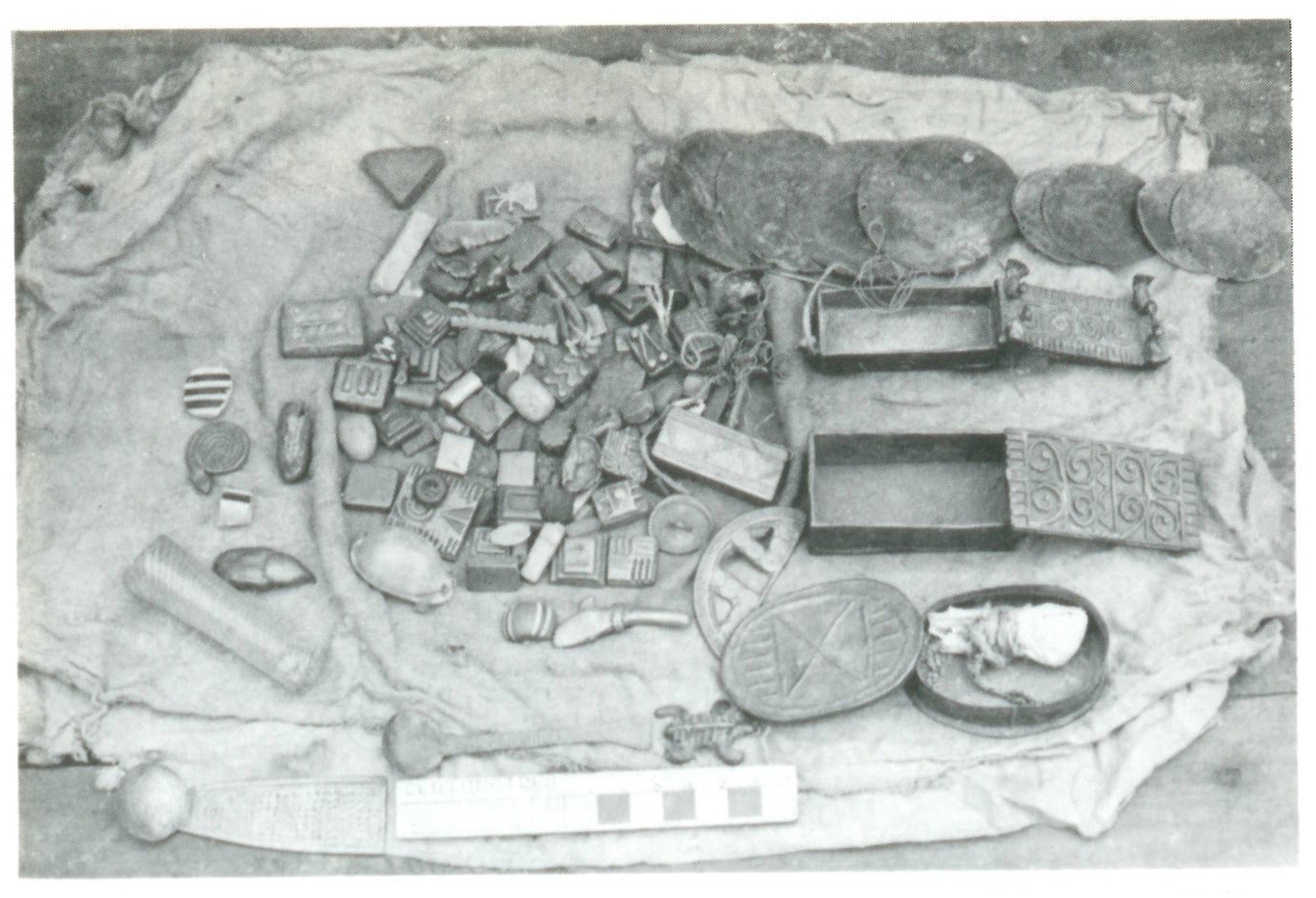 Evidence suggests that the weighting system that accompanied the gold dust transactions was of Sudanic import, developed from trade contacts from late 13th to early 14th century. The Arabs of north Africa used a minted gold coin called mitkal and a silver one called dirhem, deriving respectively from Roman denarius and Greek drachm. These seems to have been the basis for Akan standards, but with time they developed their very own system.

The corpus of the gold weighting system is made of gold dust, goldweights, seed weights, spoons, shovels, brushes, balance scales and gold boxes, and other accessories. Unlike what these names may suggest, the only gold content was the gold dust itself, while all the accompanying accessories were made in brass, copper, or silver, in accordance with the availability of metal, minted and obtained most probably from Mali (at least for the early weights). 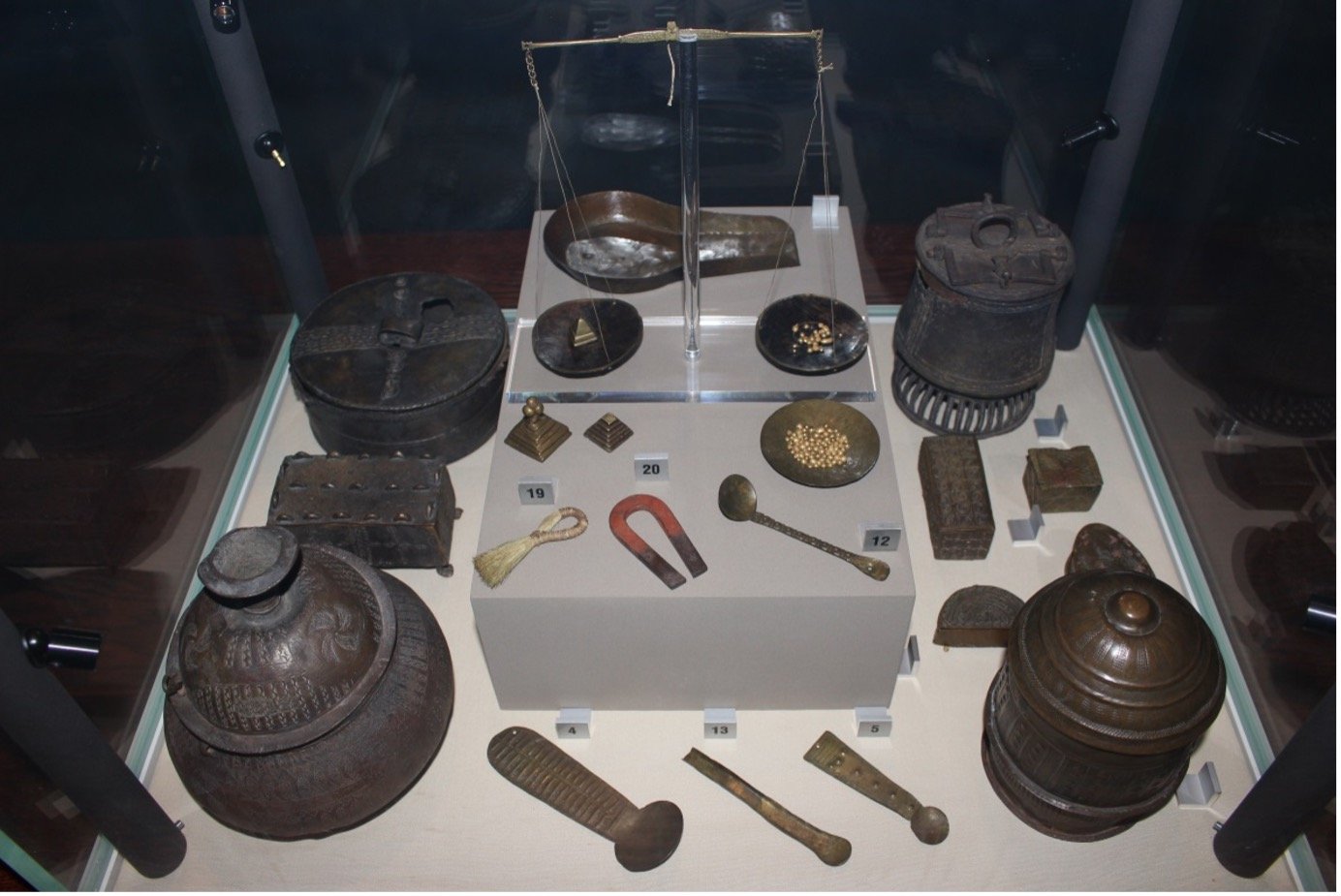 A description from 1883 suggests the complexity of this system of currency: “In the house of Mr. J. Erskine I saw his tradesmen bartering cloth for gold-dust. The weighing apparatus is complicated and curious, and complete sets of implements are rare; they consist of blowers, sifters, spoon, native scales, weights of many kinds, and ‘fetish gong-gongs’ or dwarf double-bells” (Garrard, 1980: 178).

The weighting tools were kept in a bag called futuo, which was made of several layers of cotton cloth wrapped in animal skin (leopard or antelope). In this bag, to avoid damage to the more delicate objects – i.e. balance scale, brushes and spoons – the accessories were carefully packed and stored. This process and the operation that the futuo packing involved, made it extremely uncomfortable for the user to unpack them for every single transaction, including the pettiest one. Consequently, smaller futuo were carried and objects like rice seeds were used to both negotiate smaller transactions but also for people who couldn’t own weights and gold dust. The futuo was seen to be connected to the soul of its owner, who would often be a chief, a goldsmith or a trader who could afford such luxury of imported goods (the brass and silver for the weights and accessories were imported).

The futuo would have contained essentials such as the gold weights (abrammo), balance scales (nsenia), shovels (famfa), spoons (nsawa or atere) and gold dust box (kuduo or mmumpuruwa), all of which were made of brass or silver. 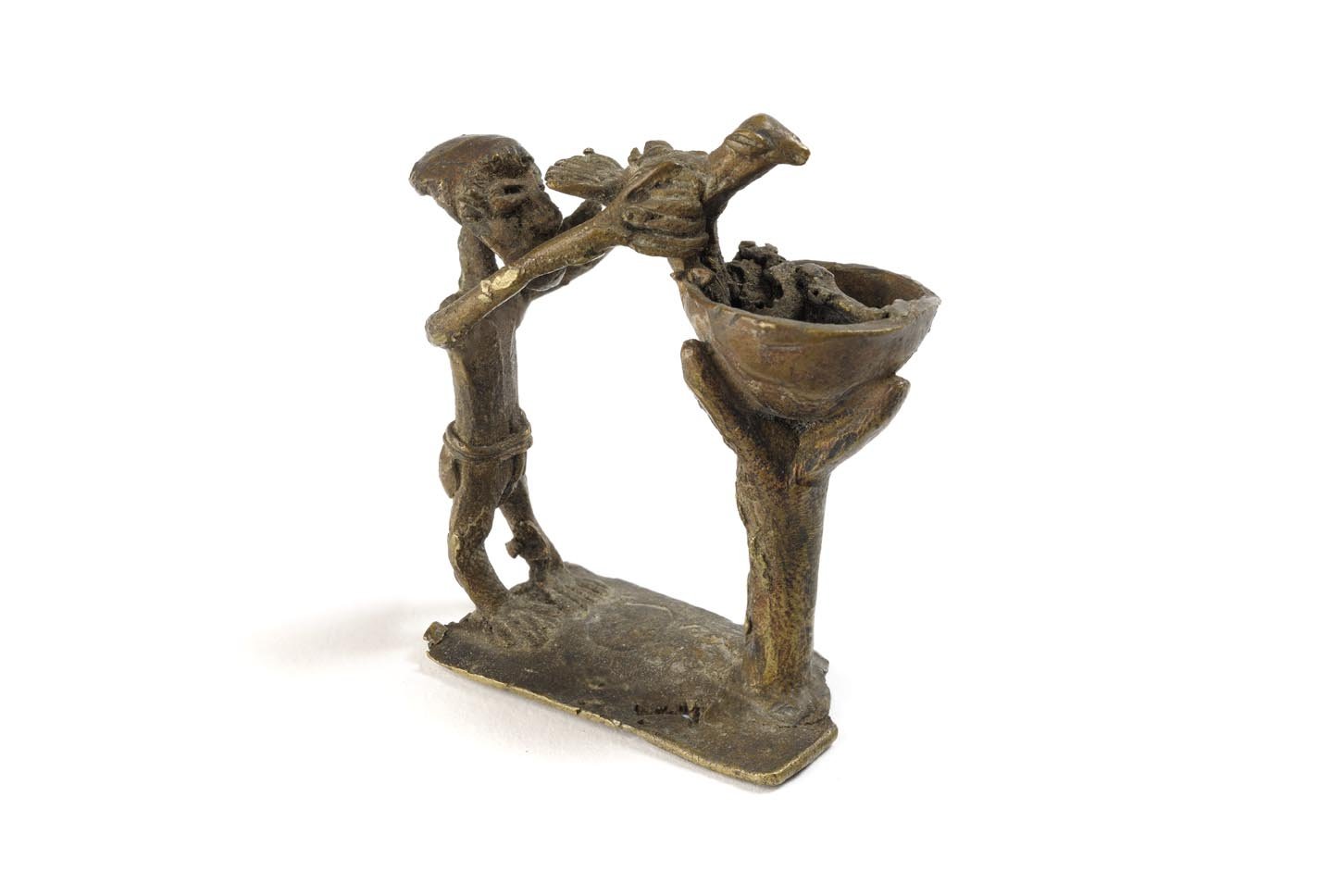 Figure 8: A figurative goldweight depicting a man sacrificing a bird at the tree of god, Nyame dua. Among the Akan, Nyame dua is a shrine within the compound of a family made of cleft-stick in which a bowl is placed, for food and drink offerings to Nyame, the ‘sky-God’. One of a group of gold weights given by Major AV Watson of the Gold Coast Regiment. Source: Ipswich Museum, object no. IPSMG:R.1944.35.14 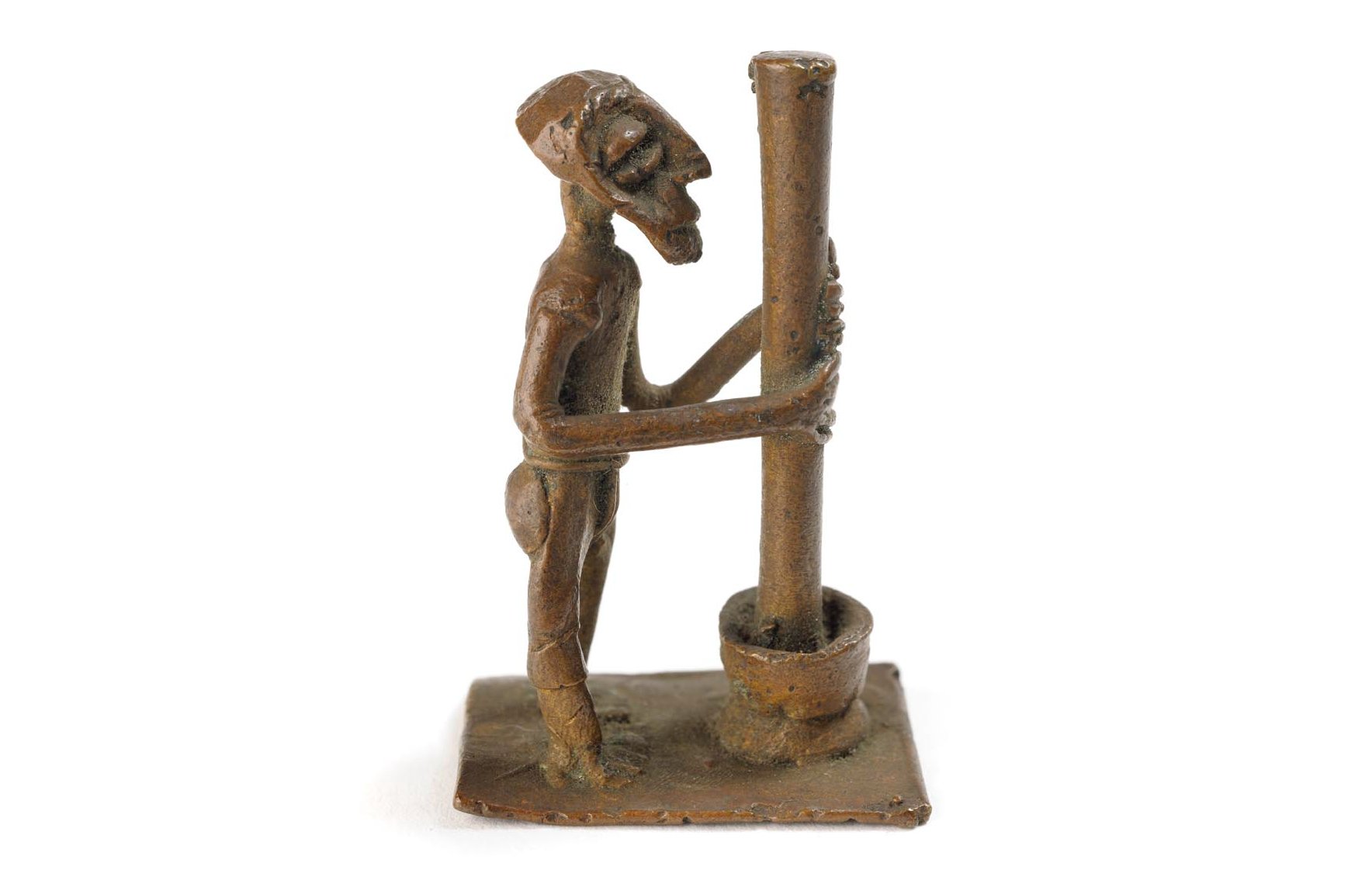 Figure 9: A figurative goldweight of a man preparing food, presumably fufu (pounded cassava and plantain), by using a long and heavy pestle in a large mortar (called woduro). One of a group of gold weights given by Major A.V. Watson of the Gold Coast Regiment. Source: Ipswich Museum, object no. IPSMG:R.1944.35.10

This body of material was produced by the skilled Akan goldsmiths. Called adwumfo, the goldsmiths were the depositary of gold, which belonged to the king, and highly regarded with respect. They enjoyed near-upper class status. They formed what can be called a guild of craftsmen. Their high regard allowed them to wear gold ornament, which would have otherwise been a privilege reserved for the king and his kinsmen. The work of the Akan goldsmith was so appreciated by Akan kings, that it is said the goldsmiths of Tekyiman (in present-day Brong-Ahafo Region) were removed from Tekyiman by the Asantehene Otumfuo Nana Opoku Ware I in 1723 to serve him in his court in Kumasi.

εBε: Proverbs of the Akan

Among the Akan proverbial sayings were – and still are – an effective way of communication; they act “as a mitigator that minimizes the […] intent of an upcoming ‘difficult’ utterance […]” (Obeng, 1996: 521), providing therefore an opportunity to filter and/or conceal one’s language and statement. Proverbs are also used to speak to the worldview and values of the Akan people, teaching its young people the ways of life of the community. They are, as argued by Peggy Appiah, the “verbal shrine for the soul of [the Akan] nation” (2000 and 2007: xiv). “[…] [A] truly educated and cultured person is one who can make use of proverbs and whose speech is full of the imagery and the innuendo that they make possible” (Appiah, 2000 and 2007: xii).

In such context, the goldweighting system, conceptualised by the power of gold and silver, became a useful tool to materialise Akan values by depicting proverbs. For this reason, many goldweights are associated with proverbs, or portray iconographies that speak to the values of the Akan people, such as liminal spaces and the belief in the afterlife, sacrifice and divinity, communal living, human behaviour, and human relations based on trust and care.

Proverbial assignments to goldweights allowed these items to expand beyond their immediate purpose and use as currency for transactions. By entering in contact with active agents (human beings), they experienced a metaphysical way of being in the everyday act of transacting, transcending their materiality and becoming media for social performance.