The story of Wooden Roots 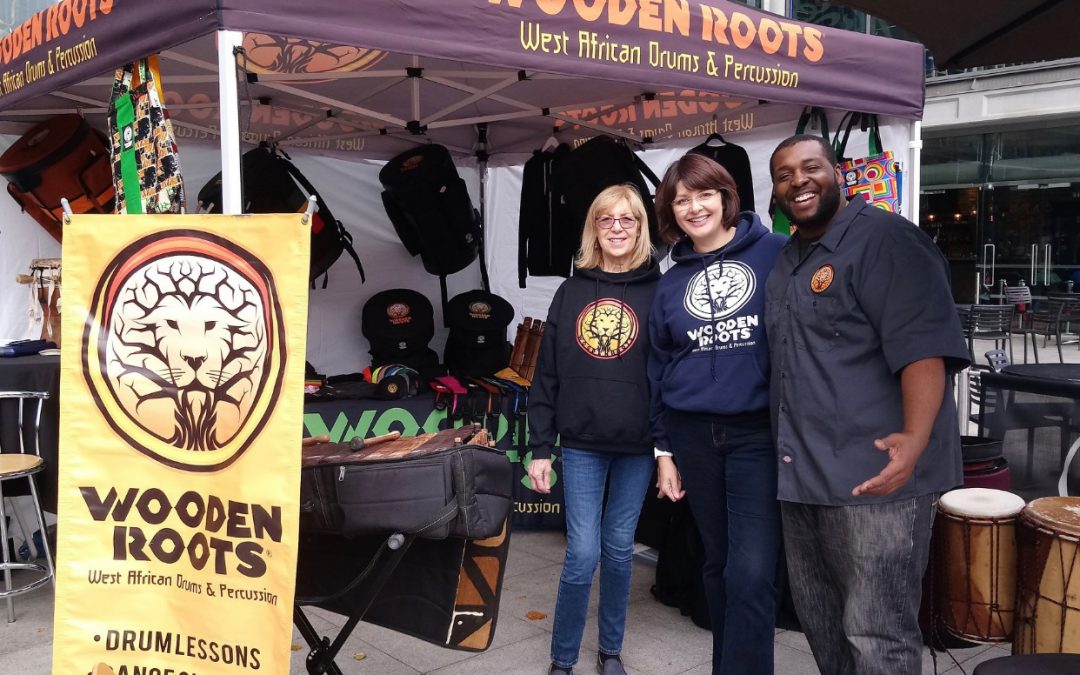 By Gemma Brown of Wooden Roots

Once upon a time Wooden Roots was based in Los Angeles, California. We successfully ran our business there from 2009, selling and repairing drums, putting on cultural events and teaching adults to play djembe. In early 2017, we were contacted by Marvel Studios. It turns out they had been watching us for a couple of years to ensure that we were the right company to provide what they needed. They told us they had a movie which was going to release in early 2018 and they would like to purchase several djembe drums from Wooden Roots for the movie – that movie was none other than Marvel Studios’ Black Panther!

We of course agreed and a conversation started in order to find out what they needed for the movie. They were very specific and requested that all the djembes they were purchasing had the same colour rope – dark green! We also provided matching green standing straps so that the players in the movie could stand and play their drums. Naturally, we got the drums ready for Marvel and shipped them to the movie set and to be honest didn’t really think about it again.

In 2018, whilst still living in LA, the movie Black Panther was released, and we went along to our local cinema to watch it. We sat in the dark with excitement waiting to see our drums, how amazing that our drums should be in this iconic movie we thought to ourselves. As the movie played, we unfortunately couldn’t see our drums in any of the shots but we could hear them! If you listen carefully during the fight scenes there is a lot of “djembe” being played and we know that it’s our djembes as we also know most of the players and artists that worked on the soundtrack and they gave us feedback after each shoot telling us intricately how on fire the djembes sounded!

Do you hear our drums when you watch the movie? What other drums do you hear?

Fast forward a couple of years and we have moved from Los Angeles to Suffolk, England. In 2019, we found out via BBC Radio Suffolk whilst they were at our studio recording a piece on us that the curators at Ipswich Museums had contacted Marvel Studios asking if they could exhibit some of the costumes from the Black Panther movie! Melanie Hollis, one of the curators at Ipswich Museums, then contacted us asking if we could provide djembe drumming workshops for the exhibit, which was called Power of Stories.

Everything ground to a halt in 2020 (the year the exhibition was meant to open) as Covid struck and the exhibition was put on hold, but this allowed Wooden Roots time to apply for lottery funding from Arts Council England. We found out in April 2021 that we were successful and we received the grant just in time as the Power of Stories opened on June 26th 2021!

What does this mean for you?

You now get to be part of all the Wooden Roots activities when you visit the exhibit. Whether you attend our “Pop Up Drumming” sessions at Christchurch Mansion OR you sign up to take a four week djembe class with us at the museum’s High Street location is up to you and because we have funding in place – EVERYTHING IS FREE!

All these activities will lead up to an explosive performance at the end of the Power of Stories exhibition where Wooden Roots and several members of The Balimaya Project will demonstrate the instruments that you hear in Marvel Studios’ Black Panther and you will have an opportunity to play them in mini workshops alongside being able to ask questions during a Q & A panel.